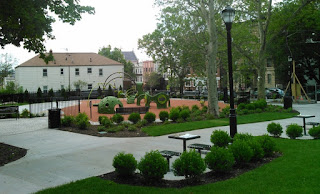 We almost have a park. Construction is scheduled to end by mid-August (or the contractor starts paying penalties), and the City Engineer supervising the project thinks actual completion will be in July. The major work left is in the hands of the fencing sub-contractor.

Also coming: bollards to help guard against vehicles leaving the roadway and winding up in the park. While these were consistently part of neighborhood requests for the park design, they were not included in the final design spec. Through persistent advocacy from the Duncan Avenue Neighborhood Association – backed up by road safety data from our safety audit – the City is adding temporary bollards, which will probably be replaced by permanent versions when grant funds are available next year for road safety upgrades to Kennedy Blvd. 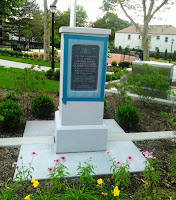 This beautiful, multi-function small park will be a great way to continue to remember Lt. Walter M. Boyd, S.Sgt. Robert H. Boyd, and PFC Joseph McGuiness, neighborhood residents who gave their lives in military service during World War II, and the many other men and women from this community who served our country.

Stay tuned for further updates here and on Facebook.